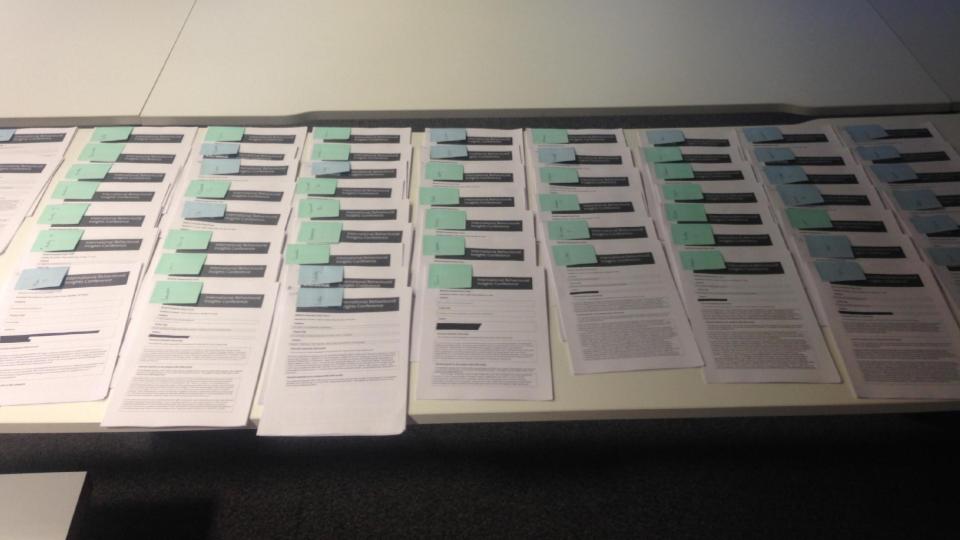 Taking a tip from how teachers grade a stack of tests, “chunking” job applications has been shown to help reduce bias and increase the accuracy in hiring.

Dozens of studies have shown that the choices we make over what we eat, how we save, and even how we vote can be affected by how those choices are presented: their choice architecture.

Research has found, for example, that the order of candidates’ names on a ballot sheet can influence election outcomes (hint: you want to be first). Studies into what’s called ‘successive contrasting’ have found that certain species of animal — like honeybees — will abandon otherwise healthy feeding grounds if they’ve just been in plentiful settings: ‘good’ can seem ‘bad’ when in contrast to ‘excellent’. Studies on humans have shown that how attractive someone seems is at least in part a function of how attractive the last person you saw was! In all, the judgements we make can be highly contextual.

So how do you remove as much of the luck, noise, and bias in candidate review as you can? Using structured interviews is a great way to consistently ask candidates the same questions, but we wondered if how we review the candidate’s answers was as consistent as it could be. We thought that instead of grading all of one candidate’s responses and then moving onto the next candidate, we should instead “chunk” responses, reviewing different candidates’ responses to the same question together (a trick school teachers grading tests have used for years). So we ran an experiment to see if these quirky ordering effects impacted hiring decisions, and if our chunking method is actually successful at reducing bias.

Using an online experimental platform, we asked 150 reviewers to rate 100 unique responses to four work-related challenges, drawn from real applications to the Behavioural Insights Team. Responses were anonymized, chunked by question, and their order within each question was randomized across every reviewer. So each reviewer scored a batch of randomly ordered responses to question 1 on a scale of 1 (unsatisfactory) to 5 (exceptional), and then a batch of randomly ordered responses to question 2, and so on. We then compared these to a benchmark score combining every reviewer’s score of that response.

The results were clear: context matters. Specifically, we found three ordering effects at play in the candidate review process:

How many interviews does it take to hire a Googler?

To cut down on time to hire, Google’s staffing team examined past interview data and determined t...
create Blog arrow_forward