Should you hire for cultural fit or adaptability? 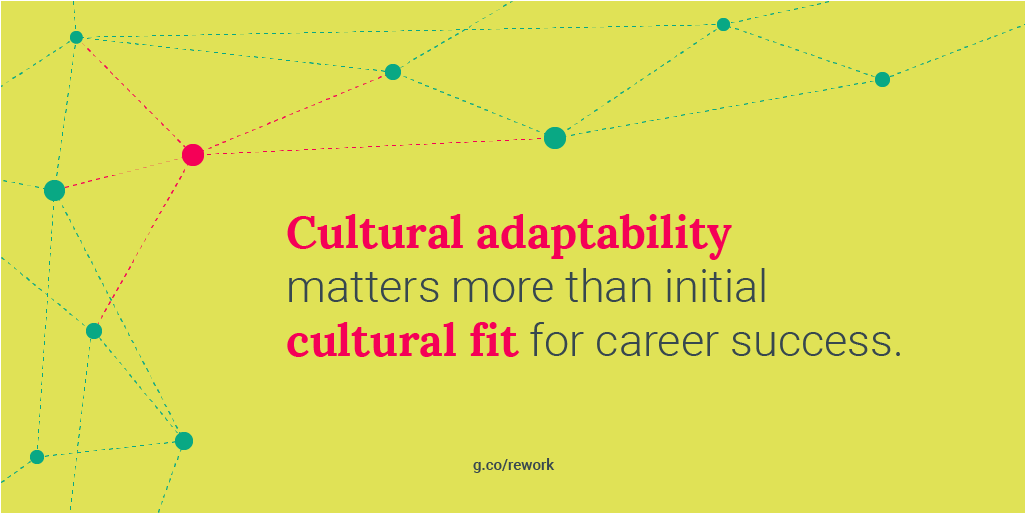 Companies increasingly view their cultures as a source of competitive advantage and hire employees on the basis of cultural compatibility. But is it better to hire someone who “fits” initially or someone who could be able to adapt quickly?

Recent years have seen a proliferation of assessment tools designed to identify, screen, and select employees who match an organization’s culture. But people vary not only in their initial levels of cultural fit but also in their “enculturability,” their capacity to adapt by reading and interpreting subtle cultural cues. So what matters more for an employee’s career success in an organization—initial cultural fit or enculturability?

This question cannot be readily addressed using data and methods that are commonly used to study culture and cultural fit: interviews and surveys. These methods rely on self-reports of how people think of themselves in relation to the organization and only provide static snapshots of these self-perceptions.

Instead, we developed a language-based model of cultural fit that focuses on how people behave, in particular, the way they express themselves in emails. Observing individuals’ behaviors over time helps reveal the dynamics of enculturation.

In our approach, a person exhibits high cultural fit when she matches the linguistic style of her colleagues. Imagine an organizational culture in which direct and aggressively stated views are interpreted as a signal of authority and competence. This same language might be frowned upon in a culture that values indirect expression and tactfulness. Our approach does not assume that certain behaviors are more effective than others; rather it assesses the cultural match, as reflected in language use, between an employee and her peers.

Because we can measure this match over time, we can also observe how employees’ cultural fit changes, or their “enculturation trajectories.” As a result, we can distinguish between initial cultural fit at the time of hire and enculturability—the rate of adaptation to the culture in the first few months after hire.

We applied this language-based model to a corpus of email messages exchanged among employees in a mid-sized technology firm over a five-year period and matched these data to personnel records from the firm. The data set is de-identified, and raw message content is transformed to statistics about linguistic style so as to protect company confidentiality and employee privacy.

So what does this mean for managers? Our results suggest that firms should place less emphasis on screening on cultural fit. As other work has shown, matching on cultural fit often favors applicants from particular socioeconomic backgrounds, leading to a reduction in workplace diversity. Instead, our work points to the value of screening on enculturability. For example, to what extent has the candidate sought out diverse cultural environments? How rapidly did the candidate adjust to these new environments? How did the candidate strike the balance between adapting to the new culture while staying true to herself? We believe that this kind of screening will help companies find employees who not only fit the current culture but who can adapt to and thrive in the organization’s culture of the future.

Amir Goldberg is an Associate Professor of Organizational Behavior at the Stanford Graduate School of Business. Sameer B. Srivastava is Assistant Professor and Harold Furst Chair in Management Philosophy and Values at UC Berkeley's Haas School of Business. Together, with V. Govind Manian (Stanford U.) and Christopher Potts (Stanford U.), they have co-authored a paper on this research that is forthcoming in Management Science.