Much of the work done at Google, and in many organizations, is done collaboratively by teams. The team is the molecular unit where real production happens, where innovative ideas are conceived and tested, and where employees experience most of their work. But it’s also where interpersonal issues, ill-suited skill sets, and unclear group goals can hinder productivity and cause friction.

Following the success of Google’s Project Oxygen research where the People Analytics team studied what makes a great manager, Google researchers applied a similar method to discover the secrets of effective teams at Google. Code-named Project Aristotle - a tribute to Aristotle’s quote, "the whole is greater than the sum of its parts" (as the Google researchers believed employees can do more working together than alone) - the goal was to answer the question: “What makes a team effective at Google?”

Read about the researchers behind the work in The New York Times: What Google Learned From Its Quest to Build the Perfect Team

Define what makes a “team”

The first step in answering this question of “what makes an effective team?” is to ask “what is a team?” More than an existential thought exercise, actually figuring out the memberships, relationships, and responsibilities of individuals all working together is tough but critical to cracking team effectiveness.

The term team can take on a wide array of meanings. Many definitions and frameworks exist, depending on task interdependence, organizational status, and team tenure. At the most fundamental level, the researchers sought to distinguish a “work group” from a “team:”

Organizational charts only tell part of the story, so the Google research team focused on groups with truly interdependent working relationships, as determined by the teams themselves. The teams studied in Project Aristotle ranged from three to fifty individuals (with a median of nine members).

Once they understood what constituted a team at Google, the researchers had to determine how to quantitatively measure effectiveness. They looked at lines of code written, bugs fixed, customer satisfaction, and more. But Google’s leaders, who had initially pushed for objective effectiveness measures, realized that every suggested measure could be inherently flawed - more lines of code aren’t necessarily a good thing and more bugs fixed means more bugs were initially created.

Instead, the team decided to use a combination of qualitative assessments and quantitative measures. For qualitative assessments, the researchers captured input from three different perspectives - executives, team leads, and team members. While they all were asked to rate teams on similar scales, when asked to explain their ratings, their answers showed that each was focused on different aspects when assessing team effectiveness.

So the researchers measured team effectiveness in four different ways:

The qualitative evaluations helped capture a nuanced look at results and culture, but had inherent subjectivity. On the other hand, the quantitative metrics provided concrete team measures, but lacked situational considerations. These four measures in combination, however, allowed researchers to home in on the comprehensive definition of team effectiveness.

Using input from executives across the globe, the research team identified 180 teams to study (115 project teams in engineering and 65 pods in sales) which included a mix of high- and low-performing teams. The study tested how both team composition (e.g., personality traits, sales skills, demographics on the team) and team dynamics (e.g., what it was like to work with teammates) impact team effectiveness. Ideas were pulled from existing research as well as Google’s own experience with what makes an effective team.

They conducted hundreds of double-blind interviews with leaders to get a sense of what they thought drove team effectiveness. The researchers then looked at existing survey data, including over 250 items from the annual employee engagement survey and gDNA, Google’s longitudinal study on work and life, to see what variables might be related to effectiveness. Here are some sample items used in the study that participants were asked to agree or disagree with:

Demographic variables like tenure, level, and location were also collected. 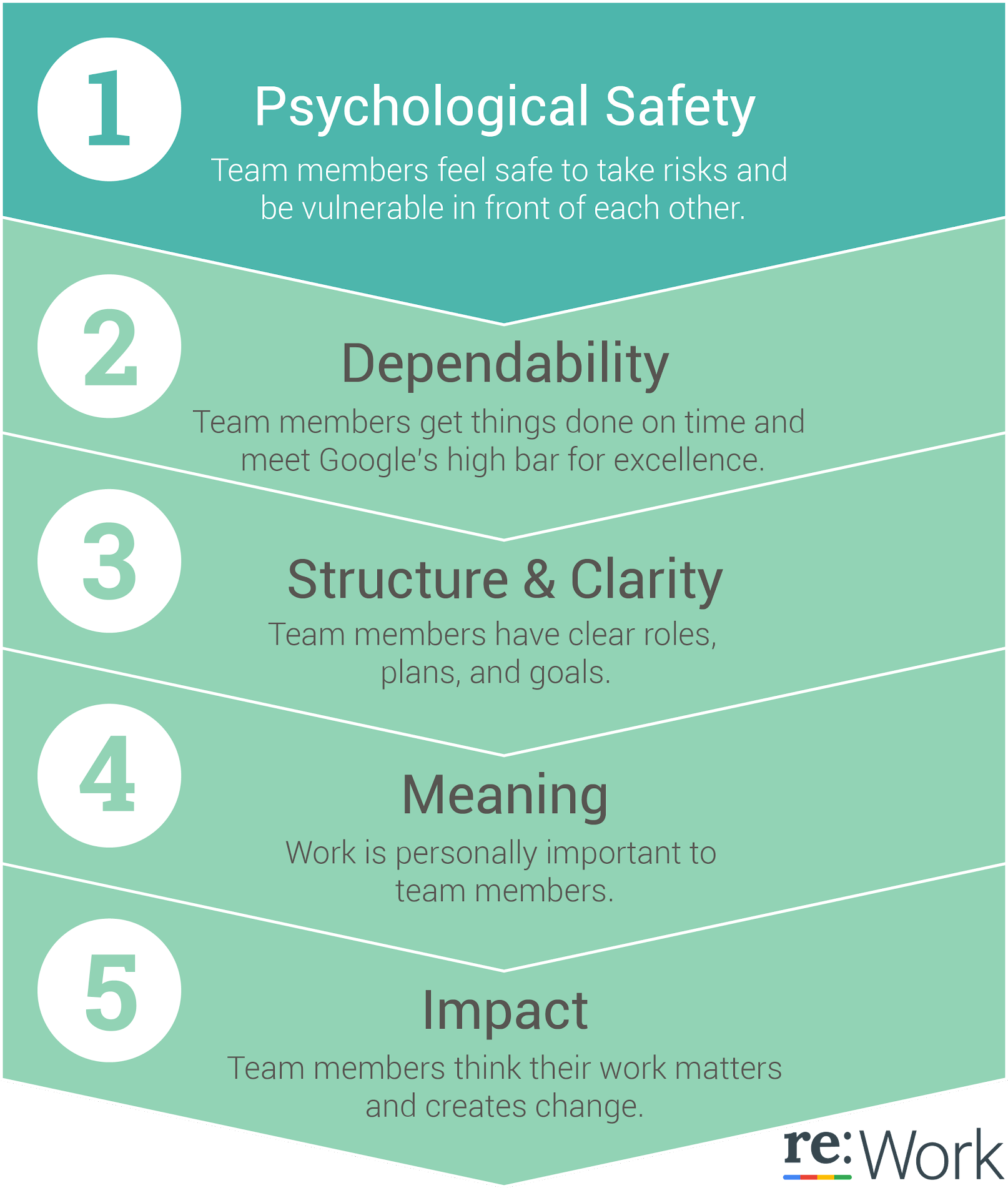 Beyond just communicating the study results, the Google research team wanted to empower Googlers to understand the dynamics of their own teams and offer tips for improving. So they created a survey for teams to take and discuss amongst themselves. Survey items focused on the five effectiveness pillars and questions included:

This discussion guide is focused on the five team dynamics Google found to be important for team effectiveness. The guide can help teams identify areas where they might want to improve and elicit ideas of how to do that.

Of the five key dynamics of effective teams that the researchers identified, psychological safety was by far the most important. The Google researchers found that individuals on teams with higher psychological safety are less likely to leave Google, they’re more likely to harness the power of diverse ideas from their teammates, they bring in more revenue, and they’re rated as effective twice as often by executives.

Organizational behavioral scientist Amy Edmondson of Harvard first introduced the construct of “team psychological safety” and defined it as “a shared belief held by members of a team that the team is safe for interpersonal risk taking.” Taking a risk around your team members may sound simple. But asking a basic question like “what’s the goal of this project?” may make you sound like you’re out of the loop. It might feel easier to continue without getting clarification in order to avoid being perceived as ignorant.

To measure a team’s level of psychological safety, Edmondson asked team members how strongly they agreed or disagreed with these statements:

In promoting the results of Google’s research internally, the research team has been running workshops with teams. In the workshops, anonymized scenarios have been used to illustrate behaviors that can support and harm psychological safety. The scenarios are role-played and then the group debriefs. Here’s an example scenario:

Uli is a long time manager known for his technical expertise. For the past two years he’s worked as manager of team XYZ, which is responsible for running a large scale project. He upholds very high standards, but in the past few months Uli has become increasingly intolerant of mistakes, ideas he considers to be “underpar,” and challenges to his way of thinking.

Recently, Uli publically “trounced” an idea offered by an experienced team member and spoke very negatively about that person to the wider team behind their back. Everyone else thought the idea was strong, well-researched, and worth exploring. Ideas have since dried up.

Uli’s ideas drove the recent project proposal, but it was ultimately rejected by the executives because it lacked creativity and innovation.

If you’re a manager, consider these recommendations when coaching team members and teammates.

This guide can help managers think about how they model and reinforce psychological safety on their teams. Based on research, this guide offers actionable tips for managers and team members to help create team environments where everyone can contribute.

The five key dynamics of effective teams that the Google researchers identified are rooted in the wider world of team performance research. Whether you’re coding at Google, riffing in a writers room, preparing for a trip to Mars, or skating in a hockey rink - teams are essential to the work experience and output. At Google, now that the Project Aristotle team has identified what makes for an effective team at Google, they’re conducting research to figure out how take the next steps to create, foster, and empower effective teams.

Whatever it is that makes for effective teams in your organization, and it may be different from what the Google researchers found, consider these steps to share your efforts:

Here are some tips for managers and leaders to support the behaviors the Google researchers found important for effective teams. These are based on external research and Google’s own experience: